From Ember to Fire: Sam’s Journey of Transformation

Robin Wolthausen, a Family Services Guide & Transition mentor, reflects on an experience with a student from his days as a field guide.

When I first met Sam, an adolescent boy in Team Avatar, his eyes were heavy and downcast. He was sarcastic, apathetic and sluggish. He argued for the sake of arguing. One day, I was working with him on fire busting (the term we use for starting a fire with our handcrafted bow drill sets), which was difficult given the poor state of his tools and his apathy toward the task. At one point he left his set on the ground and it disappeared in the mud. He told me he had made many spindles but kept losing them. Before I left, I talked with him about the importance of taking pride in making an excellent fire set and taking care so that it stays dry at all times. He acted like he didn’t hear me and nodded with little interest.

One night, weeks later, everyone in team Avatar was bow drilling to start our nightly community fire. They were each striving not just for our collective warmth and survival, but also for the chance to be the one on that cold wintry night that offered the small ember of their new self-discoveries in service to the group. Sam came to me with a reserved smile and held up his bow drill kit, exclaiming, “Robin, Robin! I busted five coals this week and I’m taking care of my bow drill set just like you said!” My heart swelled. I was proud of Sam, but more importantly, Sam was proud of himself for having exceeded my challenge. Therapeutically, the relationship with his bow drill set translated directly to his self-esteem, self-love and a commitment to serving others in making fire for his community. No matter how small, he now had something to offer himself and the world, and that is invaluable for anyone in healing. His ember was lit.

We started hiking with Sam in the cold hours before the sun rose. Our goal was to hike 20 miles together throughout the day, a challenge he had set for himself. Early in the hike, we saw glimpses of how he used to be when he arrived at Open Sky. He was unmotivated and wanted to take many breaks. He wondered why he was doing it in the first place, even though he had advocated for the hike himself. However, the negativity and apathy he was displaying seemed diluted and weak compared to his behavior early on in his stay at Open Sky. It was as if he was making a last attempt to maintain his old ways, but hopefully, finally, letting them go.

At midday, we were deep in a desert canyon and Sam seemed to come alive again. He was awestruck by the 20 ft. tall giant sage and wanted to harvest more than he could carry to bring back to share with the team for bow drill kits. My co-guide and I marveled at Sam’s transformation throughout the day and since the beginning of his time at Open Sky. We told him that he seemed like a different person that we were just now getting to know, to which he responded by saying that he felt the same way. 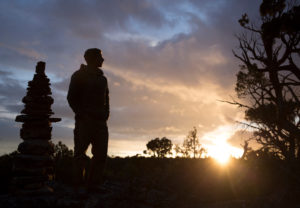 We eventually turned the map and compass over to Sam, empowering him to lead us for the rest of the hike. He was tired but determined, guiding us onward and upward, out of the canyon. As the sun set he prompted us to lead a ceremony for him near a frozen pond, owning his own transformations. We joyfully obliged, our tears falling in the fading winter light. Sam’s ember had grown into a fire that he can tend, spreading its warmth to those around him.

The Final Challenge and Self-Leadership:

At 15 miles in, the temperatures had cooled a bit and we were exhausted, causing our moods to alternate between slightly delirious and silly to short and agitated. Following Sam’s leading, we found the group vehicle we had been looking for. Here we offered Sam a choice: we could drive the final five miles back to the group, where a warm teepee and early bedtime awaited us, or we could finish the 20-mile hike by foot. After some thought, he answered by picking up his pack and hiking away without saying a word. He was determined and used all the skills he had learned at Open Sky to tell us about his emotions in a healthy way. We understood completely.

As we hiked uphill, I asked Sam “What are you working towards right now? What does this final five miles represent for you?”

He paused and replied, “While I don’t know what I want to do with my life yet, I know that when I figure it out, no matter what it is, this will help me accomplish it. If I can do this, I can do anything.” We believed him. As we hiked toward the rising moon, we could tell that Sam’s fire was big, bright and full. He was ready for graduation.