Austin received his culinary arts degrees from Johnson & Wales University in 2011 and has a strong background in the restaurant industry. Before receiving his culinary degree, he worked at Philmont Scout Ranch in Cimarron, New Mexico as a guide and cook. This is where backpacking became an important part of his life, as Austin spent time backpacking throughout New Mexico. After graduating culinary school, he worked in a variety of culinary jobs from farm to table to large catering events and healthcare foods. Austin’s experience in these jobs resulted in his deep understanding of the food world, with a skill set to match. Austin was drawn to Open Sky because of his desire to combine his two passions of culinary arts and wilderness.

As Food Service Supervisor, Austin utilizes the skills he has learned to support Open Sky’s food and nutritional needs. With his knowledge of food systems, he promotes sustainable, seasonal, and local foods that connect Open Sky’s students with the nourishment they need in the field.

Austin enjoys spending time outside. Growing up in the flat state of Florida, he fell in love with the mountains when backpacking in New Mexico. He lives Cortez, Colorado with his wife and dog. Activities such as biking, backpacking, and camping have been lifelong hobbies. Once in Colorado he started skiing, hiking, and exploring the large landscape he feels fortunate to have access to. 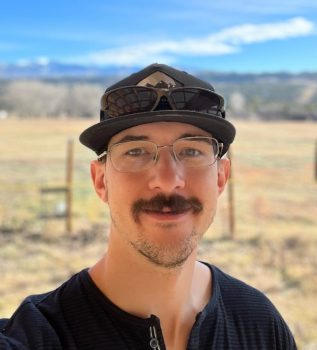