Constantine grew up in several branches of scouting, including Cub Scouts, Boy Scouts, Venture Crew, and Sea Scouts. He graduated from New College of Florida in 2015 with a BA in Psychology and went on complete a service year with City Year Denver in AmeriCorps. It was with City Year that he first learned of wilderness therapy. After his service year, he completed a two-month instructor development course with Colorado Outward Bound School where he mountaineered, rock climbed, and finished a two-week practical in Alaska.

After the course, Constantine took a road trip and stopped at the Outdoor Behavioral Healthcare Council’s annual Wilderness Therapy Symposium, where he met the founders of Open Sky. He liked what he learned about the program, so he spent the next year recovering from an injury and working towards a guiding position with Open Sky. Constantine joined the company as a Field Guide in October 2017.

For Constantine, the most rewarding part of being a field guide is knowing that every day he spends in the field is another day spent helping someone change their life and their world. His strengths with students are building rapport, holding boundaries, and pushing them out of their comfort zones. His strengths with other guides are having fun, giving feedback, and providing a space of stability when things are hectic.

Constantine loves to spend his time off bonding with his fellow guides outside of work. Much of his time is spent in Durango doing movie nights at each other's houses, potlucks, and the occasional adventure outside of town to explore something new. Two fun facts about Constantine are that he was once the lead singer of a punk/ska band and he plays trombone. 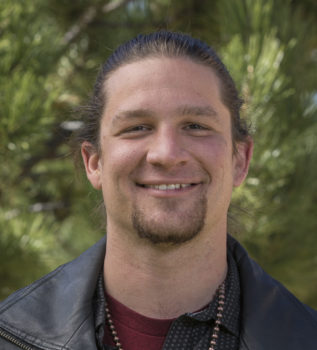