After moving to Durango in 2003, Erin worked for the City of Durango in an administrative capacity, where was able to support the Durango community by processing grant submissions. Erin’s attention to detail and thoroughness in processing the grants secured the funds for Durango’s transit center and systems. After three years, Erin decided to try something different and opened three bakeries in the Durango area. During the six years they were in operation, she focused on both the retail and commercial sides of the business, providing baked goods to a variety of stores and local consumers. She managed operations, human resources, and did all the business bookkeeping.

Erin has been with Open Sky since 2009 and has held a variety of positions, the last few years in Human Resources and Finance. In 2018, Erin earned MBA and MSF degrees from Northeastern University in Boston. Her flexibility, dedication, organization, work ethic, and willingness to learn are all assets. Working for Open Sky ignited a passion to work for a greater good and help those in need, even if it’s from afar. The experience has been inspiring and life-changing.

When not at work, Erin spends can be found hiking in the backcountry with her dog, spending time with friends, practicing yoga, and connecting with family. 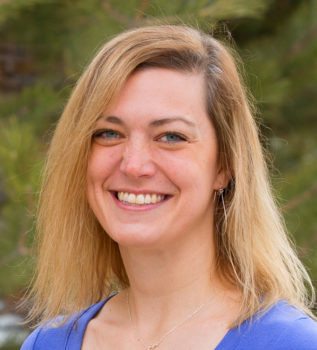