Kat grew up in Michigan camping and canoeing with her family. She has fond memories spending summers on the water of the Great Lakes or in faraway mountains. One of her greatest experiences was a backpacking trip to the Chugach Range in Alaska. It was there that she first realized the transformative power of the wilderness. Kat attended Grand Valley State University, where she graduated with a BS in Sports Management and Adventure Tourism. During her summers in college, she led backpacking and canoeing courses in the North Woods of Wisconsin and Canada. After this introduction to the outdoor industry, she moved to Durango in pursuit of a space where she could combine her passions for the outdoors and professional growth. After spending her first year in Durango with a small start-up company, she returned once again to the wilderness as a field guide with Open Sky in September of 2019.

As a field guide, Kat learned about the intersection of family and student-centered therapeutic work. She found her voice as a guide through her compassionate challenge of student’s thoughts and beliefs about themselves and their families. She saw the benefit and necessity of holding firm boundaries while seamlessly building rapport through mentorship with every student she encountered.

In her current role as Family Care Coordinator, Kat continues to build and support relationship between students and their families. In this position, she brings her passion for the outdoors, knowledge of the field, and excellence in communication together.

In Kat’s free time, she enjoys camping, backpacking, and canoeing. She and her constant companion, a blue heeler named Hazel, adventure together around southwest Colorado. While at home, she loves game nights with her roommates and sharing locally grown meals with friends in the backyard. When she can, she loves to visit her family and friends in the Great Lakes Region. 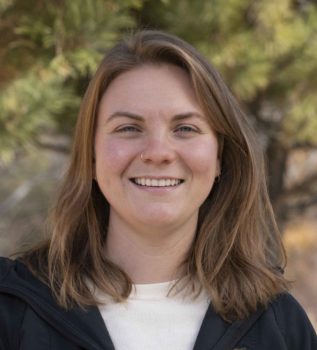