Before coming to work at Open Sky, Nate spent many years with Wilderness Awareness School in Duvall, Washington, first as a young teen student and later as an apprentice teacher and summer camp instructor for teens and adults. While there, Nate learned the value and power of connection with nature. He took away much knowledge in building relationships and community with nature and the people around him. He also learned advanced survival and naturalist knowledge, cumulating in a five-night survival experience with little but the clothes on his back.

What drew Nate most to wilderness therapy is the goal of creating a safe, powerful, transformative experience for young people in the wilderness. He had had many of his own transformative and healing experiences in nature and he hopes to offer that same sort of experience for others. He was particularly drawn to Open Sky by both the beautiful desert and mountain locations, as well as the emphasis on mindfulness practices and ceremony in the Open Sky culture.

As a guide, Nate most values the opportunity to make a difference in someone’s life. He feels grateful and humbled to work with people who are facing difficult times and coming of age into a world that often feels overwhelming and intimidating. He cherishes every moment of intense emotion and hardship that he is able to witness and guide a student through.

Within his guide team, Nate offers slowness and reflection in moments that can feel frantic or stressful in the field. He feels confident in his ability to build rapport and trust with the students in his team. He role models groundedness and emotional regulation well. His voice and presence can bring a calming, relaxed feeling to a team that is feeling stressed or escalated.

Nate was drawn to work in the outdoors because it is where he often prefers to spend his free time. He likes to spend time on his own or with one or two friends wandering remote places, tracking animals, and eating wild plants. At home, he is learning how to tend to a garden he and his housemates have taken on. He spends time growing tomatoes, potatoes, corn, and squash, among other things. He has also recently taken up on the hobby of carpentry and wood carving. Though he has crafted many a practical spoon and bow drill kit, he is also exploring the more artistic side of woodworking. He enjoys tabletop and trading card games and is particularly fond of cats, both the wild and house cat varieties. 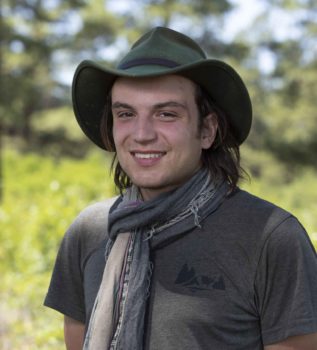