Rick Crawford was born in Nashville, TN, and spent his early years in Chattanooga, TN, moving to the Atlanta, GA area during high school and college. Pursuing an entry to veterinary school, Rick earned a Bachelor of Science in agricultural science/poultry science from the University of Georgia, where he was the recipient of both academic and athletic scholarships. Rick was also a member of UGA track and field and cross-country teams. Rick earned opportunities to participate with the US Cycling Team and was part of the US Olympic Development program for the 1984 Olympics Games in Los Angeles, CA. Rick’s ambitions to become a veterinarian were replaced by more time-sensitive goals like cycling and triathlon at the world-class level while his body was in its prime. Rick competed professionally in cycling and triathlon for twelve years.

Rick moved his family to Durango in 1992, where he and his wife Jackie have raised three boys. Durango has proven a great place to raise boys, a recreational paradise that has provided an exceptional environment to raise strong young men ready for the rigors of the world.

Rick has remained involved in the highest levels of professional cycling and has coached some of the world’s most successful cyclists. As director of the Fort Lewis College Cycling Program, Rick led the Skyhawks to more than 14 team national championships and the number one team ranking in US collegiate cycling.

In an effort to diversify after a lifetime of cycling-focused endeavors, but retain involvement in working with youth, Rick sought to gain a foothold within Open Sky Wilderness Therapy, where the opportunity came in the Intake department. It’s a great blend that allows Rick to incorporate his experience as a seasoned coach and mentor and be part of a very important mission. There is a team aspect that is very appealing to Rick as well, where people work together towards a common goal.

Rick and his family have resided in Hesperus, CO for the past twenty years, where they are avid gardeners, living close to the land, raise a few critters, and leave as small a footprint as possible. Rick’s boys are grown up and scattered across the US, so the labors of maintaining the homestead rest on his and his wife’s shoulders. There are always projects and heavy lifting to do, with hunting, fishing, hiking, biking, running, and climbing trees when time allows. Sitting on the back porch listening to the sounds of nature and watching the sunset with his wife is the ultimate treat and a mainstay of life at the Crawford residence. 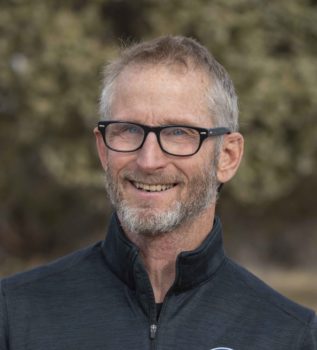