The path that led to Shane working in wilderness therapy is a long and winding road. In the wise words of one of Shane’s favorite writers, Ed Abbey, “may your trails be crooked, winding, lonesome, dangerous, leading to the most amazing view.”

Shane was born and raised in the sleepy beach town of Los Angeles, CA. After getting his BA in Film & Media Production from US Santa Cruz (banana slugs!), Shane went to work in Hollywood as a film editor out of college, only to find that his soul was called elsewhere, craving something more. He wanted to work outdoors, where he felt alive, and to be of service to others. After living on the road for a year, Shane’s path eventually led him to Durango, where he became a field guide with Open Sky, a decision he deems one of the best in his life.

Field guiding changed Shane’s outlook on life in that it gave him the gifts of leadership, perseverance, grit, flexibility, self-compassion, patience, and an overall sense of empowerment. Shane was a field guide for three years, eventually becoming a senior guide and mentoring newer seniors. Then, Shane took the leap, returning to school to attain his master’s degree in Counseling from Prescott College in Arizona. Shane truly believes Open Sky has altered the river’s course of his life for the better and that his unconditional self-love can largely be attributed to his work as a guide when he was forced to address and reconcile with the parts of himself that were holding him back.

Shane strongly believes in the power of the wilderness to heal all wounds and act as a salve for grief. He has found that solo trips into deep nature for days or weeks have brought him a greater sense of connection to what matters and peace with himself. Shane loves supporting others who are struggling to find a sense of peace within themselves and brings a warm and welcoming presence to the work he does with students at Open Sky.

In his free time, you might find Shane snowboarding, baking bread or a pie, on a long hike, typewriting some poetry, at Jiu Jitsu class, or reading a yummy book in front of a warm fire with some tea on a cold winter’s night. 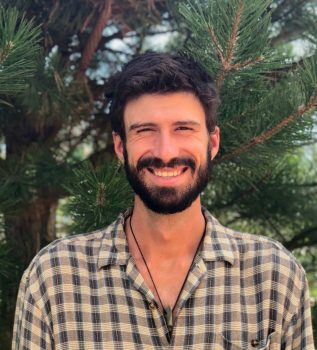