Prior to joining Open Sky in 2018 as field guide, Terrence worked as a secondary school math teacher in Santa Barbara, CA and Antigua, Guatemala. Terrence has always had a passion for the outdoors and after working as a field guide, he realized that he had found a new calling and wanted to become a therapist. He is currently finishing a master’s degree in social work at New Mexico Highlands University.

Working outside almost never feels like work to Terrence. Though his job is often exhausting and has pushed him to his limits, the hilarity and beauty of nature and the wonderful humans he works with brings him great fulfillment. Terrence loves being able to have a positive impact on another human’s life, whether he works with them for a day, a week, or their entire stay. Terrence has found joy in his own life applying the same skills he used with clients.  Terrence’s strengths are the candor and compassion with which he works with clients. In addition to being one of the tallest humans at Open Sky, he also has a strong emotional presence and one of the biggest laughs and senses of humor.

Terrence tries to balance his time off with outdoor pursuits and cozy couch time. He enjoys reading, cooking, and drinking tea with friends. Outside, he soaks up all Durango has to offer with snowboarding, long hikes with his dog, Kiva, and stand-up paddle boarding. 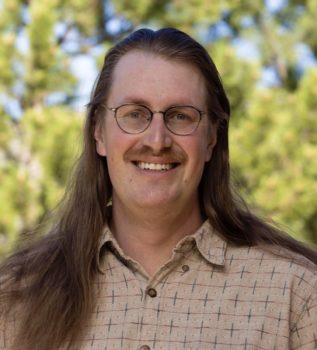