Thanksgiving in the Field: A day of Community, Connection and Fun!

Every year, millions of families partake in a gloriously gluttonous gathering to celebrate the Thanksgiving holiday and life’s many blessings. For many, Thanksgiving takes place around a table in the comfort of a warm home. For Open Sky 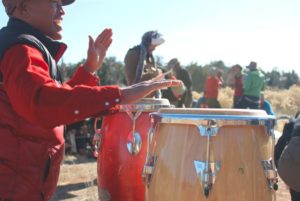 students, Thanksgiving is celebrated outdoors, under the warm desert sun.

In many ways, Thanksgiving in the field is similar to what occurs in many American homes. Groups begin prepping ingredients for the Thanksgiving feast early in the morning. Turkeys cook in multiple Dutch ovens throughout base camp, while groups gather together and participate in a special events designed to build community, connection and (of course), fun!

Yesterday around noon, all groups, guides, medics, and field managers gathered in the meadows, the center of the Open Sky Utah base. As teams trickled in, a football was thrown into the mix and students began playing a friendly game of catch.  Whether team members played catch or stood on the sidelines watching, the moment was pleasantly nostalgic for many and seemed to be a positive omen for all the fun to come.

The first community event activity was a “bust off.” Teams lined up along a series of fire pans with para-chord tied between five gallon jugs. The game is simple: first team to bust a coal, make a fire and burn through the para-chord, wins. And the prize? Open Sky gold: two pounds of bacon (and, no need to fear, there was a vegetarian alternative.) The moment Field Manager, Ethan Gehl, shouted, “Go!” teams went to work. Frantically, students were cheering their fellow peers along, making nests, splitting wood, and busting coals. In the end, Team D was declared the winner and a great time was had by all!

After the bust off, students moved on to a rousing game of Thanksgiving-themed trivia. Winning groups were awarded with candy and other special treats.

The day’s community events culminated in the highly anticipated Open Sky talent show. Open Sky talent shows are humorous, light-hearted events where groups work together to perform special skits or songs. Usually, students op to satirize some of their daily experiences by getting a chance to switch roles with guides for their skits or rework a song to have lyrics related to Open Sky. Each team’s skit this year was quite humorous, except for one.

This year, humor did not win the talent show. Rather than going for the funny bone, Team G went straight for the heart strings. They stood side by side and expressed one thing they loved about themselves and the individuals who stood next to them. After this, they engaged every team by reciting the chant they use to close a council. It was an extremely fitting and heart-felt way to end the talent show and the day’s community events.

After Team G’s stellar performance, Ethan took a moment to acknowledge that although everyone is feeling far from home, that does not mean, “We are not surrounded by family.”  On days like Thanksgiving, it is easy to feel isolated when separated from our parents, siblings, cousins, and friends. However, many expressed a deep appreciation for the strong bonds students have built together and with their Open Sky guides.

Holidays focus on community and that’s exactly what Thanksgiving was about at Open Sky. From the bust off to the talent show to friendly games of catch between teams, Thanksgiving was a joy for all who were present. As the sun began its daily descent into the desert sky, teams retreated back to their base camps with smiles and hungry bellies, ready to devour the turkeys waiting for them.